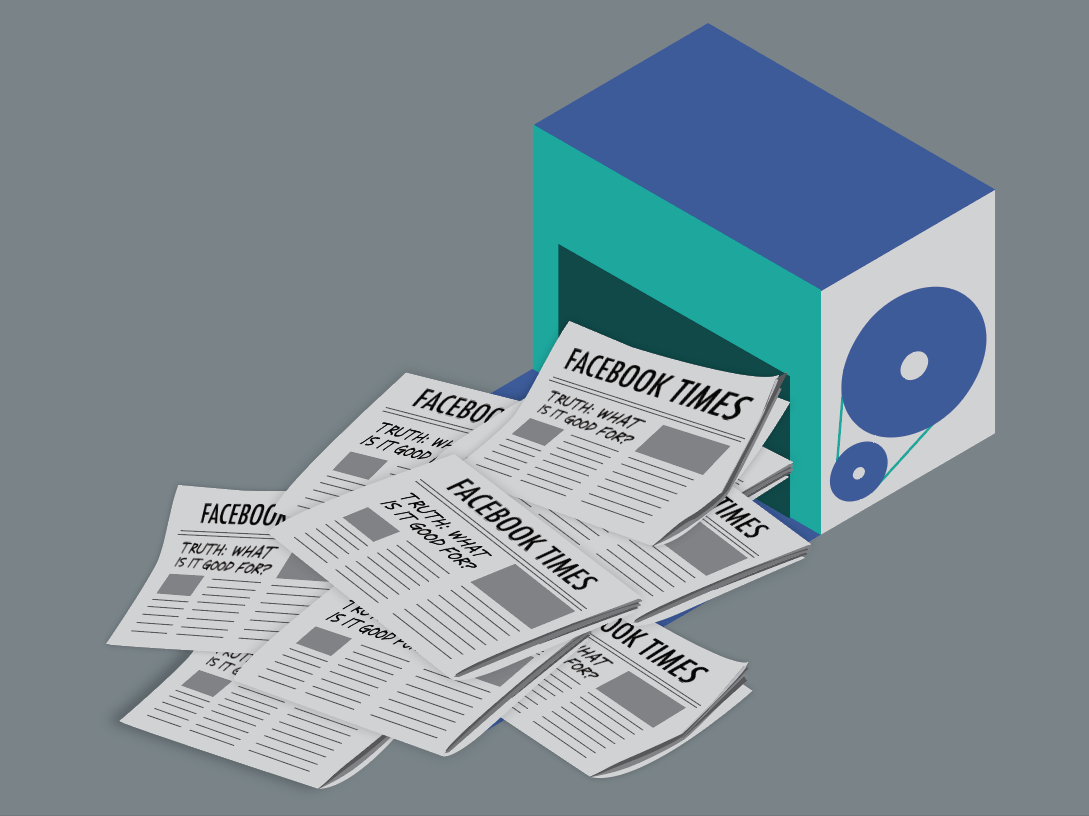 Truth: What is it good for?

According to the Oxford dictionary, ‘post-truth’ is an adjective that relates to or denotes “circumstances in which objective facts are less influential in shaping public opinion than appeals to emotion and personal belief.” Also according to the Oxford dictionary, it was 2016’s word of the year, on account of its surge in mainstream vernacular and the media landscape.

Over the last months of 2016 the term ‘post-truth’ and its less elegant, less euphemistic companion ‘fake news’ didn’t just trend but soared, mostly to explain the seismic outcomes of the US presidential election and Brexit referendum. But while the post-truth age has been exacerbated by the heat of politics, its very rise can be pegged to the movement and permissions of technology in the first place.

“WE CREATED THIS MESS…”

With metrics that prioritise emotionally evocative content for “reactions” and “shares”, an indiscriminate interface that homogenises how that content is packaged, and reinforcing algorithms that serve up not just more of the content one responds well to, but more extreme versions of it, Facebook in particular has been hauled into the hot seat for its role in the political developments of 2016.

Whatever your beliefs about the actual impact of fake news and Facebook on Donald Trump’s win and Brexit, the real-world ramifications of the social network and tech in general cannot be dismissed in good conscience. The conversation at least escalated enough to elicit a public acknowledgement from CEO Mark Zuckerberg of Facebook’s phenomenal influence on the global stage. “Facebook is a new kind of platform different from anything before it,” he posted in a status update in December. “I think of Facebook as a technology company, but I recognize we have a greater responsibility than just building technology that information flows through.”

Earlier that month, Internet entrepreneur Sunil Paul issued his own, stronger statement on Medium about this new normal in which facts are subjugated, even made irrelevant: “We created this mess. We are the ones who architected and built the web and social media. We are the ones who share, post, and tweet stories that seem to be true, or we would really like to be true.”

As creators and designers of a world we want to see and inhabit, we cannot pretend to enjoy the luxury of theory, nor can we operate in silos, isolated from the consequences of our work.

In this spirit, Paul goes on: “We are the ones who can fix it.”

We can fix it by keeping from getting complacent or defensive, and continuing to innovate in tech. Facebook, for one, has announced that it’s taking measures to combat hoaxes and fake news on the site, including easier reporting and providing disclaimers to users when a story has been disputed within the community or by third-party fact checking organisations. Paul suggests tagging content with a “truthfulness score,” while the startup Videopath offers technology that allows producers to infuse more context into their content so viewers can engage more thoroughly with it. For more ideas (or to share your own), check out this live and collaborative brainstorming document of solutions.

We can step up education in media literacy, critical thinking, and meta-cognition. It might be helpful to recognise that even with the best intentions, we will always favour an interpretation or an offering that confirms our expectations and beliefs rather than one that violates them. By gaining a better understanding of our own human biases and limits, we might then be able to improve our discretion.

If we want to fight this epidemic, we also have to reorganise our social and financial incentives accordingly; we have to make fake news less profitable and journalistic integrity more rewarding. This can happen through technology, education, and policy changes, but fundamentally, it will take, in Paul’s words, a passionate community of people ready to take action in pushing for a change.

THE TIME FOR COURAGE

At the end of the day, what this era calls for isn’t a slackening of truth; it’s a redoubled defence of it. To quote Chimamanda Ngozi Adichie in her recent essay in The New Yorker: “Now is the time to counter lies with facts, repeatedly and unflaggingly, while also proclaiming the greater truths: of our equal humanity, of decency, of compassion.”

Now is the time for courage – the courage to stand up for and firmly behind your values, the courage to say yes or no loudly and publicly and to act accordingly, but also the courage to accept the discomfort of having our own convictions challenged, and to do so with openness, respect, and diligence. As the outgoing President Obama said in his farewell speech on January 10: “Without some common baseline of facts, without a willingness to admit new information and concede that your opponent might be making a fair point, and that science and reason matter, then we’re going to keep talking past each other. And we’ll make common ground and compromise impossible.”

Truth is a powerful, beautiful thing. Let’s not simply slide by and declare that we’re over it.